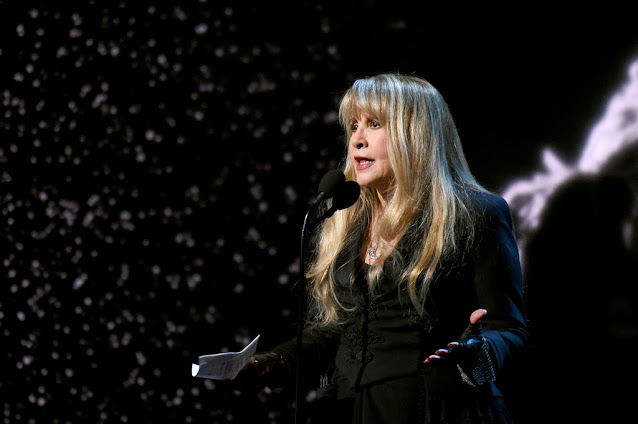 Stevie Nicks hits No. 1 on Billboard's Hot 100 Songwriters chart (dated Oct. 24), leading for the first time since the chart's 2019 launch, thanks to her writing credit on Fleetwood Mac's "Dreams."

Notably, Nicks solely penned "Dreams," helping boost her position on Hot 100 Songwriters (as she does not split chart points with any other writers).

"Dreams" has surged thanks to the viral TikTok video featuring the song, in which Idahoan Nathan Apodaca rides his longboard while drinking a large bottle of Ocean Spray Cran-Raspberry juice. The video became so popular that the band's Mick Fleetwood and Nicks have since created their own tribute clips. Ocean Spray even gifted Apodaca a red pickup truck (filled with bottles of Ocean Spray juice).

As a member of Fleetwood Mac and as a soloist, Nicks has a longstanding history on Billboard's charts. She sports a songwriting credit on two Hot 100 No. 1s: "Dreams" and Destiny's Child's "Bootylicious" in 2001, as the latter samples Nicks' 1982 hit "Edge of Seventeen (Just Like the White Winged Dove)."

Nicks also received a songwriting credit on Miley Cyrus's "Midnight Sky," as the song also samples "Edge of Seventeen." Cyrus' single hit No. 14 on the Hot 100 in August.

Over on the Hot 100 Producers chart, Metro Boomin logs his second week at No. 1, thanks to six production credits on the latest Hot 100. All the songs appear on his new album with 21 Savage, Savage Mode II, which debuted at No. 1 on the Billboard 200 dated Oct. 17. The set's "Mr. Right Now," featuring Drake, leads the six-pack at No. 24, after debuting at No. 10.

The weekly Hot 100 Songwriters and Hot 100 Producers charts are based on total points accrued by a songwriter and producer, respectively, for each attributed song that appears on the Hot 100; plus, genre-based songwriter and producer charts follow the same methodology based on corresponding "Hot"-named genre charts. As with Billboard's yearly recaps, multiple writers or producers split points for each song equally (and the dividing of points will lead to occasional ties on rankings).