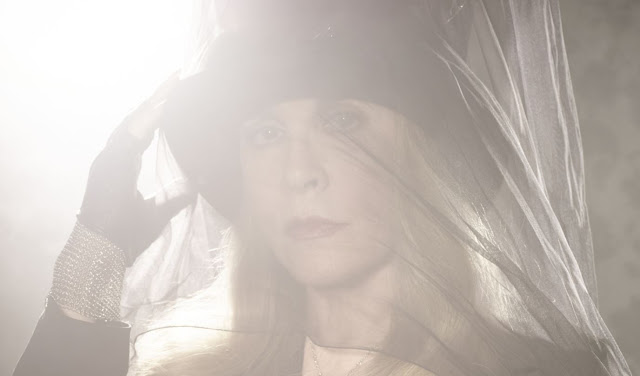 Stevie Nicks Can’t Wait for the Magic to Come Back

In another life, Stevie Nicks would have been a music-film editor. “I think I’m really good at it,” she says one Friday evening, calling from her home in Los Angeles. Her canine companion Lily is begging for her attention with a toy as Nicks reflects on her second life. “I can only say this about a few things.”

She’s had plenty of experience, working closely with director Joe Thomas on concert films for Fleetwood Mac (2004’s Live in Boston), her late friend Tom Petty (2006’s Live From Gainesville), and most recently, Stevie Nicks 24 Karat Gold Concert Film. Recorded during her 2017 tour stops in Indianapolis and Pittsburgh, the film is getting a special release this month and being screened at select drive-ins, theaters, and exhibition spaces on October 21st through 25th. The set lists featured classic solo and Nicks-led Fleetwood Mac songs along with tracks off her 2014 album, 24 Karat Gold: Songs From the Vault. For the music fans desperately missing live shows in the time of Covid-19, the film perfectly encapsulates the tambourine-banging, shawl-twirling, story-spinning magic that only Nicks can deliver.

Putting the project together with Thomas became one of two pandemic projects for the rock goddess (the other being her new song “Show Them the Way”). She flew out to Chicago in May with her assistant on a “full-on, fogged-out, Covid-free private plane” and lived in a house on a golf course that no one had been in since before lockdown had begun. Nicks would go to Thomas’ studio, masked up alongside everyone else (“I felt imprisoned by the mask, but I love the mask — I felt safe”), and got to work, diligently assessing the footage captured by all 12 cameras from shows in the two cities.

“I’m really the second editor,” she says of her uncredited job. “The fact is that if I don’t like a shot, it’s not going in.” She learned, as she had in past editing-room experiences, that men see women differently.

“We would rather see ourselves the way we see ourselves,” she says. “They kind of like us to be messy and a little bit like, ‘Oh, I just got here.’ And you’re like, ‘No, uh-uh. That is a terrible shot.’” That realization is part of what makes her think that working on concert documentaries for other bands could’ve been her other calling:

“Had I not been a singer and had the accidental grace to have been thrown into a situation where I was watching somebody else edit a rock & roll film of another band that had girls in it, I would’ve said, ‘I love this.’ Because you know why? I could’ve made it better.”

The process was a tedious one that paid off; there were tiny moments only Nicks could see that made the film all the more special. “I find shots that nobody else would look for,” she explains, citing one in particular where the camera was pointed over her drummer’s shoulder. “Nobody else would’ve thought to look at it, and it’s this amazing picture of me and Waddy [Wachtel, her longtime musical director and guitarist] standing and looking straight at each other. Waddy just slowly smiles at me, and you see the relationship that he and I have had since I first met him 1971.”

The less-fun tedium was when she had to sift through 46 minutes of storytelling, most of which served to contextualize the then-new songs she was debuting on the tour while also tributing her longtime friend Prince, who worked with her on “Stand Back.” Nicks admits that she slips “into [her] Valley Girl-ness” when she is in the throes of telling a really good story. “I talk to the audience as if you were seriously in my living room and I’ve known you for 50 years,” she explains. “So as I’m watching all these stories, I’m going, ‘Well, we have to take all the “likes” out because that’s dorky.’”

There were so many stories she had to self-edit even during the tour, ones that would’ve been too tangential even by Stevie Nicks standards. She laughs recalling another favorite Prince story of hers, one she left out of her tour monologues. In this tale, he picked her up after a Fleetwood Mac show in Minneapolis in his purple Camaro and drove an hour to his home.

“We finally got there and then we work on a song all night, and he barely gets me back, exactly on time, on the tarmac, at 20 minutes after 2 o’clock the next afternoon,” she says. The song itself has never been recorded or released, not yet at least.

“But if you tell that story and then everybody out in the audience says, ‘Well that’s amazing. So play us the song,’ which is exactly what would happen if you were sitting in your living room with your guitar or at the piano and had a couple of your best friends there that you’re running stuff by.”

Nicks’ stories got a little bit longer every night, she says, mostly because the response remained so enthusiastic. No one was upset that some of her many big hits were taken out of the set list to make room for her 24 Karat Gold tracks, all of which were written between 1969 and 1987. “I do have the right, at 72 years old, to play some of the songs that were written exactly at the same time all the other songs were written,” she says. “Everybody was really behind me on it.”

Of course, the performances themselves were the easiest to edit. Nicks compliments the direction of Wachtel, who “runs that band like a finely tuned Maserati,” and the singing of Nicks in tandem with her girl singers Sharon Celani and Marilyn Martin was flawless. Even with a few hiccups in the Indianapolis show, all was rectified by the time the band got to Pittsburgh.

Returning to her 2017 live shows proved to be a godsend for the star in the midst of staying home. She was already planning on taking the year off after back-to-back solo and Fleetwood Mac treks to finally work on a miniseries based on her song “Rhiannon,” which is inspired by the mythological Welsh witch of the same name. After a conversation with her friend and fan Harry Styles in February, the heaviness of not knowing when she can safely return to touring really hit her:

“He said to me, ‘I don’t think we will walk onstage again, Stevie, until the end of 2021, if then.’ And I’m going, ‘Oh, my God, this very, very young man is telling me this sage idea he has in his head.’ It was that phone call between a really fantastic artist in his twenties and me, in my seventies, going, ‘We as a music community of entertainers are screwed. Our lives as we know it is over.’”

Nicks is a realistic person, and she knows there is no chance she will step onstage and put her fans in danger until the coronavirus pandemic is fully under control. “The problem is we’re all hoping that some magical thing comes down and just cures all, like the president thinks is going to happen, but it’s not going to,” she says. “We know that. We have to dance around it and figure out what to do in the meantime.”

Nicks has a habit of making lots of things better, whether she realizes or not. For what can only be chalked up to cosmic reasons and her own crystal visions, her song “Dreams” for Fleetwood Mac has been given a second life during the pandemic. The song has been all over TikTok since the spring, helping Rumours get a major boost on the Rolling Stone 200 albums chart. As we were on the phone, the song reached a new apex when TikToker Nathan Apodaca (@Doggface208) went viral for the supremely chill video of him skateboarding, drinking cranberry juice, and singing along to “Dreams.” Everyone from Nicks’ bandmate Mick Fleetwood to Shakira have re-created it, and Nicks even joined TikTok to do her own spin on the clip, lacing up some roller skates as she sings over Rumours on vinyl. As she prepares to release a concert film built around her desire to tell and celebrate the stories of her past, a 43-year-old song of hers has taken on a life of its own. Outside of her music, her cursive-print love letters to fans that she has shared on social media every so often have spread far and wide, another glimmer of delight and hope as only she can provide.

“This is about the closest to a big, full-on concert that’s not 25 years old that you can see,” she says of her film. “You can feel the magic. Knowing that some day, when this is under control, the magic will come back. Because we’ll all come back.”