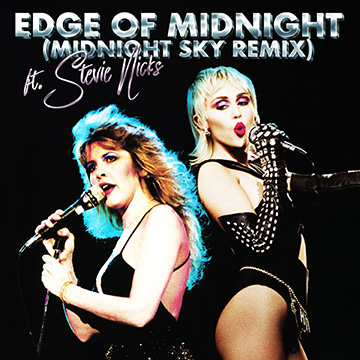 Because it’s not enough for just one vintage Stevie Nicks song to have reentered the zeitgeist (see: the TikTok “Dreams” resurgence), Miley Cyrus is doing her best to make sure that history quickly repeats itself by pushing another Nicks favorite, “Edge of Seventeen,” back into public prominence.

Late Thursday night, Miley released what is officially deemed “Edge of Midnight (Midnight Sky Remix),” a track that mashes up her own current single, “Midnight Sky,” a top 20 hit released in August, with “Edge of Seventeen,” the hit that appeared on Nicks’ first solo album, “Bella Donna,” back in 1981.

Although no details were immediately released about the track apart from the two singers’ respective tweets, it does appear that Nicks participated in the remix to the extent of lending her voice to Cyrus’ new song, too, as it appears in the conjoined mix, which starts off with Waddy Wachtel’s unmistakable 16th-note guitar riff.

“Stevie Nicks has always been my idol & an inspiration. It’s an honor to now call her my friend and collaborator,” Cyrus wrote on Instagram. Among the immediate responses were triply repeated fire emoji from fan Kacey Musgraves. Nicks herself posted: “Miley…Magical! Loved singing with her!”

Cyrus had previously acknowledged getting Nicks’ approval to sample “Seventeen” for the original track, in which the interpolation is far more subtle. The singer said on Jimmy Fallon’s show that she contacted Nicks and “said, ‘I have an alternate melody if you don’t want to kind of like pay tribute to you and your greatness and how much you’ve inspired me.’ And she said, ‘You can borrow from me anytime.'”

The idea of a more overt mashup of the two songs had already achieved some popularity before this official release. YouTube user Kelly Green, who goes under the name “kelexandra,” combined the two songs in a series of videos that have accumulated more than a million views since the first of them was uploaded August 15.

Cyrus’ official mashup is not the first time a major pop star has felt compelled to adopt Nicks’ classic as part of a new song. Destiny’s Child sampled Wachtel’s guitar part on “Edge of Seventeen” for the trio’s “Bootylicious” smash in 2001, and although Nicks didn’t appear on the track itself, she did put in a cameo in the video.

Nicks has openly admitted doing some nicking herself, when she based another early solo hit, “Stand Back,” on something she picked out of Prince’s “Little Red Corvette,” although few probably would have noticed any similarity if she didn’t point it out. In her new concert film, “24 Karat Gold,” Nicks tells the story of calling up Prince to tell him she was borrowing an element from his hit and inviting him to the studio to get his seal of approval.