REVIEW: STEVIE NICKS REMAINS AT THE TOP OF HER GAME 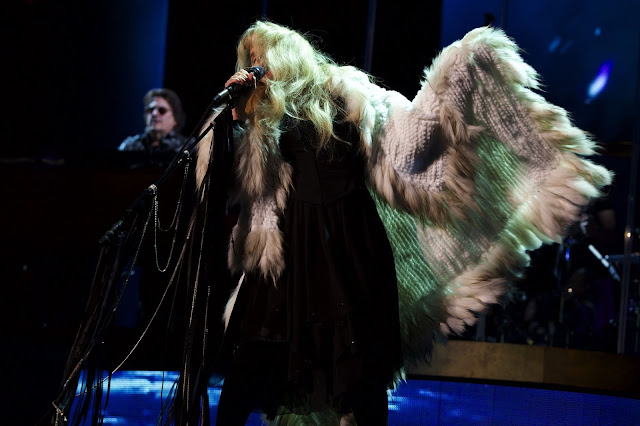 In 2019, Stevie Nicks became the first woman to be inducted into the Rock & Roll Hall of Fame twice – for her work with Fleetwood Mac and her illustrious solo career which, since 1981, has spawned 8 hit LPs and classic hits like Edge of Seventeen, Stand Back, Talk to Me, Rooms on Fire and Leather and Lace.

Her latest project, the movie 24 Karat Gold: The Concert, comes amid the pandemic that’s seen touring events cancelled and live music venues shuttered – with the star taking her 2016/2017 solo tour to the big screen as a means of escapism for fans.

Accompanying the release is Live in Concert: The 24 Karat Gold Tour – collecting Stevie’s live set on 2CD and 2LP formats for the first time.

Fans of the star, who recently released her first single in six years, Show Them the Way, will know the frustrations of her solo sets which, for a number of years, rarely differed and featured the same handful of classic solo and Fleetwood Mac hits. This time around, though, things are different…

The 24 Karat Gold Tour came following two back-to-back tours with the band – 2013’s Fleetwood Mac Live jaunt and the 2014/2015 On With The Show Tour, which saw the return of Christine McVie – in between which Stevie recorded and released her eighth solo album, 24 Karat Gold: Songs from the Vault.

The record sees the singer-songwriter revisit outtakes from her previous LPs, which she took to Nashville with Eurythmics star Dave Stewart and re-recorded over a three-week period.

It resulted in a 16-track collection and, after dipping into her “gothic trunk of lost songs,” the star hit the road to unearth more lost gems on stage – with a setlist featuring all the hits along with album cuts and rarities that’d never been performed on the concert stage.

Look no further than opening track Gold and Braid – originally recorded for and omitted from Stevie’s debut LP Bella Donna – which, to this day, has not been issued on a studio album. It sets the tone for a set packed with golden moments which, even for the most casual fans, is a breath of fresh air.

Three 24 Karat Gold tracks are included – Belle Fleur, Starshine and If You Were My Love – along with rare album cuts Bella Donna, Wild Heart and New Orleans, and Crying in the Night – the should-have-been lead single from her 1973 pre-Fleetwood Mac album with Lindsey Buckingham.

Of course, the hits are in there, with Gold Dust Woman and Edge of Seventeen both clocking in around the 10 minute mark. Rhiannon, Gypsy and Landslide also feature from her Mac catalogue, alongside solo hits like If Anyone Falls and Stop Draggin’ My Heart Around.

The pièce de résistance: a stunning, mid-set, eight-minute rendition of 2010’s Moonlight (A Vampire’s Dream), which has been reimagined as a sweeping piano ballad, building to a crescendo that incorporates the rock-tinged album version and elevates the track to another stratosphere.

When it comes to live albums – whoever the act – we’ve come to expect the usual mix of hits plus a 3 or 4 “deep cuts,” so for a star like Stevie Nicks to let loose and throw as many curveballs as she does in this show is a testament to an artist who, after five decades in music, remains at the top of her game.

Stevie Nicks – Live in Concert: The 24 Karat Gold Tour is available on download or stream now. The 2LP version will be released in December.