Stevie Nicks on Dancing With The Stars

Well... She finally made her first prime time appearance promoting 'In Your Dreams'!... and the first prime time performance of 'Secret Love'. Stevie looked really great, wore the boots, was rocking the wavey hair she's been sporting lately and it looked like she was wearing a new skirt on the outfit... It was nice.  She sounds like she still has some residual of the flu and pneumonia that she caught on the day her new album was released (May 3rd). But I think she pulled it off! Plus given it was LIVE I'm sure she was a little nervous knowing the size of the Dancing With The Stars TV audience.  Vocally on 'Secret Love' you could hear a bit of a rasp in her voice and she may have been slightly out of tune in places... But like I said given that she's only just getting over the flu and pneumonia where she had to cancel shows and other appearances on the east coast - I think she did really well.
Landslide sounded much better vocally. The song was cut down for the show but still sounded like the great Landslide!
It seems it doesn't matter what TV show any of these live performers play on, it never really sounds right. Even on the award shows where there are a lot of live performances, you would think it would be perfect, but it isn't... there's just something missing... I'm sure it's the way it's mixed. 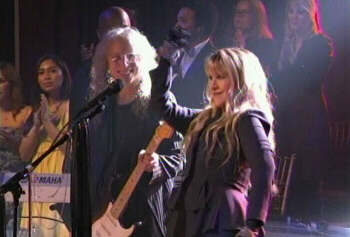