That recognizable curly mop of hair above the high forehead is fully gray now, and the man himself is just shy of his 62nd birthday, but Lindsey Buckingham moved about like a frenzied teenager while playing like the experienced master guitarist he is at the Pabst Theater Saturday night. 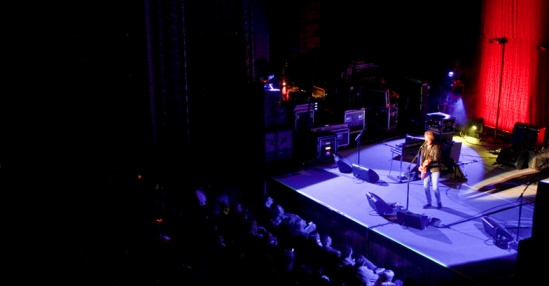 Best known for revitalizing the blues-rock sound of Fleetwood Mac starting in the '70s, along with then-partner Stevie Nicks, Buckingham has just released his sixth studio album, Seeds We Sow. The lively crowd was there to hear "the hits," and Buckingham delighted with innovative arrangements of the classics as well as stirring live versions of the new works, backed by his solid trio of band mates—Neale Heywood on guitars, Walfredo Reyes Jr. on drums and percussion and Brett Tuggle on bass, keyboards and guitar. This small lineup created a sound that easily rivaled bands with far more personnel (and far less personality).

Buckingham clearly differentiated between his big commercial successes with Fleetwood Mac, referring to that period of his career as "The Big Machine," and his solo work, which he equated to "The Small Machine." Rather than just recreate slick studio sounds, Buckingham stripped out the high production values and simply faced the audience, solo, guitar in hand, for gorgeous, passionate renderings of Mac hits like "Never Going Back Again" and "Big Love." All the more impressive were solo hits like "Go Insane" and the top-10 hit "Trouble," with Buckingham bringing out a completely different side of the songs with his ghostly, faint tenor and deft guitar work.