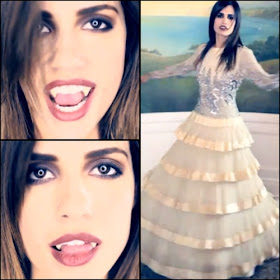 Q&A with Torrey DeVitto on her new "Vampire Diaries" role. During the interview she was asked about her appearance in Stevie's "Moonlight a Vampires Dream" Video.

You recently played violin on Stevie Nick’s song  “Moonlight (A Vampire’s Dream)" on her recent album In Your Dreams. How did that come about?


I grew up playing violin and before I even knew I wanted to act, I always thought that violin was my path in life and that was what I was going to do. And then when I got into acting when I was 15, 16 I still kept up with my violin.

[Stevie Nicks] knew that I played; she’s one of my mom’s best friends, so I’ve known her for a really long time. This song was really close to her, and she was like, ‘I want you to play this and you to play this only.’ So I played for her and we worked together and it was a lot of fun.