Fleetwood Mac is famous for drug-addled affairs between band members. But at the Hamptons Film Festival premiere of “In Your Dreams,” a documentary about the making of her 2011 album of the same name, Stevie Nicks told Confidenti@l she has no plans to write a juicy tell-all.

“I’m never going to write that kind of book,” Nicks (above) said. “If I do anything, it will be just vignettes of the magical moments of my life.”

Go your own way, Stevie!


See how one quote can take on a life of it's own? Huge amount of on-line press with Stevie's remarks towards Nicki Minaj (some of it below).

But I have to admit, some of the headlines from today are pretty hilarious!  It's debatable whether the saying "All Press is Good Press" applies...


Stevie has since released a statement through her publicist Liz Rosenberg retracted what she said
saying:

“I want to apologize for my remarks about Nicki Minaj’s behavior toward Mariah Carey which I said during a long and exhausting day of interviews. It was very out of character for me and I deeply regret what I said. I feel very protective toward Mariah Carey who has gone through many difficulties in her life and I spoke without thinking. I think all artist should be respectful toward one another and that includes me. I am truly sorry.”
- Stevie Nicks


AMERICAN Idol execs can thank their lucky stars they didn't hire Stevie Nicks as a judge: explaining an on-air strangling to the censors would have been difficult.

Nicks, who was coach for the contestants last season, weighed into the on-air feud between Nicki Minaj and Mariah Carey, telling The Daily that she would have sent Minaj to the place where the rooms are permanently on fire if she had been in Carey's shoes.

Following news of the weirdly boring/probably fake feud between Nicki Minaj and Mariah Carey, itinerant fortune teller Stevie Nicks decided she should probably jump in. NATURALLY. And her words for Minaj were not pretty.

"I would have killed her in front of all those people and had to go to jail for it," the former Fleetwood Mac star promised.

Stevie added that normally she would have just gone with a bat-bogey hex or a jelly-legs jinx, but unfortunately she had her wand confiscated by the Wizengamot for violating the International Statute of Secrecy. So, manual strangulation it was. Then she ran out of polyjuice potion and turned back into Professor Trelawney. The end.

If you think that Stevie Nicks is a bizarre person to weigh in on the Mariah Carey/Nicki Minaj American Idol feud, she'll see your bizarreness and raise you a murderous impulse. Pop music's most cherished witch figure seems to be the last person in the world who doesn't think Mariah and Nicki's public squabbling is a publicity stunt to court interest for the dying brand that is Idol, and that's a great thing because Nicks is saying ridiculous stuff as a result.

How dare this little girl...If I had been Mariah I would have walked over to Nicki and strangled her to death right there.

If you didn't get that, here's clarification:

I would have killed her in front of all those people and had to go to jail for it.

So there you have it: If Nicki Minaj said, "Off with your head!" to Stevie Nicks, Stevie Nicks would have offed Nicki Minaj (and, depending on how tight her grip, her actual head), one-upping the nascent diva and creating a reality TV moment to top all the reality TV moment countdowns through infinity. Mariah, meanwhile, just sighed and then tattled to Barbara Walters. We're being robbed of must-see TV.

Stevie, however, says she wouldn't take such a judging gig, though, explaining, "If you stick me in the middle of a burning fire, I don't think I'd like it very much." But clearly, we'd be thinking the rooms are all on fire every time that Stevie walked in the room.

As far as the whole debacle involving Nicki Minaj and Mariah Carey getting into a verbal altercation on American Idol, are you team Nicki or team Mariah? Well, it's clear who the legendary Stevie Nicks is riding with.

While most people have dismissed Nicki and Mariah's so-called beef as a publicity stunt perpetuated by the singing competition, Nicks, not-so-much.

The iconic Fleetwood Mac singer goes off on the YMCMB Barbie in a manner that would literally have you CHOKE, saying:

“How dare this little girl! … If I had been Mariah I would have walked over to Nicki and strangled her to death right there.”

If that weren't enough, she adds:

“I would have killed her in front of all those people and had to go to jail for it.”

We know Nicki Minaj is from Southside, Jamaica Queens, but we're thinking Phoenix, Arizona ain't nothing to play with either!

WOW. Here's what Stevie Nicks had to say about the Mariah Carey/Nicki Minaj feud while promoting her new documentary in the Hamptons. Fake or not, this feud is getting good.

Fleetwood Mac frontwoman, national hero, and severely underrated Saturday Night Live muse Stevie Nicks has (finally?) weighed in on the Nicki Minaj/Mariah Carey feud that’s threatening the very sanctity of American Idol—the Olympic Games of late-empire America. For an article titled “Fleetwood Smack,” Nicks told The Daily: “How dare this little girl. . . If I had been Mariah I would have walked over to Nicki and strangled her to death right there.” The most upsetting part of this whole thing is the criminal “Fleetwood Smack.”

There are so many better puns! You, us, America’s Next Top Pun, now!

- “Dreams”? More like nightmares!
- She’s angling to make her a black-eye magic woman!
- Go your own way. . . to the emergency room, Nicki Minaj.
- Is Stevie showing Nicki some mercy? No! It’s a Mirage.
- “Don’t stop” is what Mariah Carey is going to be cheering as she watches Stevie Nicks strangle Nicki Minaj to death.
- Nicki Minaj better hope the triage nurses believe in miracles.
- Stevie makes shoving fun.
- There are Rumours that Nicki Minaj’s face is going to scar.
- You know what’s a Mystery to Me? Why Nicki never learned to sufficiently feign respect for Mariah Carey.
- Stevie Nicks wants to introduce Nicki Minaj to her fists: Sara and Rhiannon.
- Stevie took her hand and she threw it down/She climbed Nicki’s back and she turned around.


Stevie Nicks Doesn’t Like How Nicki Minaj Talks To Mariah, Says She’d Have Killed Her Right There
The inquisitr

Singer, songwriter, and all-around music legend Stevie Nicks has emerged from pop culture obscurity to sound off on the American Idol feud between Mariah Carey and Nicki Minaj.


Dear Nicki Minaj, Stevie Nicks Has Got Your Number
dlisted

Here's the #1 reason for why Steve Nicks should've been an American Idol judge this season. Stevie Nicks was once a mentor on that shit show, so The Daily (via Gawker) asked her what she thinks about the bitch brawl between Mimi and Nicki Minaj. Mimi might be scared that Nicki is going to bust a hot pink bullet into her cowardly lion weave, but Stevie Nicks isn't scared of Nicki at all. Stevie would be making dresses out of dyed black sheets in prison if Nicki came at her like that.

"How dare this little girl...If I had been Mariah I would have walked over to Nicki and strangled her to death right there. I would have killed her in front of all those people and had to go to jail for it.

You really don't mess with a crazy witch whose last "fuck" was eaten away by cocaine a long time ago.   If American Idol is still using mentors, they should get Stevie, Dionne Warwick and Aretha Franklin to do it. Then they should gather those three in a room, throw Nicki Minaj in there, lock the door and tell the children to cover their ears, because it's not going to be pretty.

It's a damn shame that Stevie Nicks never had any children, because she'd make an amazing abuelita. 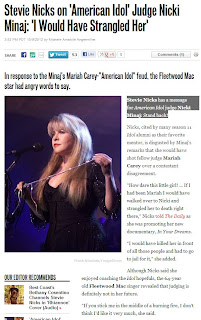 Stevie Nicks on 'American Idol' Judge Nicki Minaj: 'I Would Have Strangled Her'
The Hollywood Reporter

Stevie Nicks has a message for American Idol judge Nicki Minaj: Stand back! 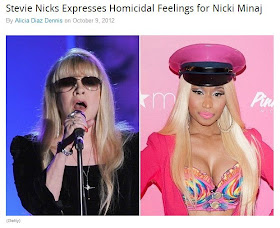 Zimbio
Iconic performer Stevie Nicks has managed to avoid making a play for reality television, perhaps because she knows she'd end up in prison. In a recent interview, Nicks insisted that if she were in Mariah Carey's candy-colored stilettos, Carey's American Idol co-star Nicki Minaj would be dead. Fighting fire with fire: Stevie does it like it's nothing.

"How dare this little girl... If I had been Mariah I would have walked over to Nicki and strangled her to death right there," Stevie is quoted as saying. Oh, and just in case you thought maybe the writer missed some context, Nicks added, "I would have killed her in front of all those people and had to go to jail for it."

Thankfully for divas like Minaj, Nicks knows well enough to stay away from semi-scripted drama. "If you stick me in the middle of a burning fire, I don't think I'd like it very much."

Nicki Minaj has yet to respond to Stevie's rash statements, but given her history of Twitter tantrums, it wouldn't be surprising if she throws a couple of expletives Stevie's way in the next couple of hours.

It may be a feud concocted for ratings, but Stevie Nicks is taking the rivalry between Mariah Carey and Nicki Minaj VERY seriously.

Asked about this supposed American Idol spat, the Fleetwood Mac singer made it quite clear on whose side she falls.

“How dare this little girl!" Nicks said of Minaj. "If I had been Mariah I would have walked over to Nicki and strangled her to death right there.”

Ironically, of course, Carey has alleged that Minaj actually threatened her life during a taping in Charlotte last week.

“I would have killed her in front of all those people and had to go to jail for it,” added the fiery 64-year old artist.

Damn. How does she really feel, we wonder?!?

Whose side are you on in this feud? 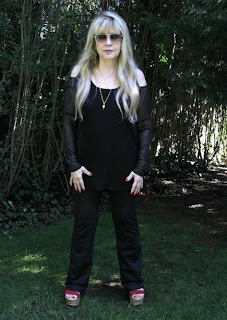 
Last season on “American Idol,” Stevie Nicks was a coach for the contestants. But she says she’s glad she’s not involved this year, now that smack-talking Nicki Minaj is there. Weighing on the rapper’s recent outburst against Carey, Nicks said, “How dare this little girl! … If I had been Mariah I would have walked over to Nicki and strangled her to death right there.”

Sitting poolside in East Hampton New York promoting her new documentary, “In Your Dreams,” the still stunning 64-year-old is on a rock and a roll. “I would have killed her in front of all those people and had to go to jail for it,” the former Fleetwood Mac star promised.

Nicks also revealed if she and Lindsey Buckingham were starting out today they would “absolutely” go on “American Idol,” “The X Factor” or “The Voice.” “That’s how you get seen these days,” she explained. But, Nicks says, “I would have had to drag [Lindsey] kicking and screaming. He probably would have given them the finger.”

And would she ever judge a show like that? Nicks insists, no way. “If you stick me in the middle of a burning fire,” she says, “I don’t think I’d like it very much.”