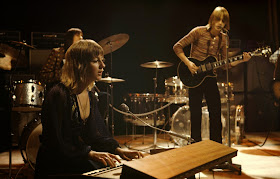 Even die-hard Fleetwood Mac fans forget (or never knew) that English-born Christine McVie was part of the band’s first incarnation as a British blues act whose intermittent success and ever-changing lineup prevented them from widespread success.  The Fleetwood Mac that people (especially Americans) tend to think of is the band’s California reinvention of the mid-‘70s, a reinvention that brought Lindsey Buckingham and Stevie Nicks on board and eventually resulted in the band’s permanent pop canonization.  The chemistry between Buckingham and Nicks, both on-record and off as writers, performers, and lovers, tended to throw a long shadow over the decades, perhaps unfairly obscuring the very real, very substantial contributions that Christine McVie made to the group’s success.

It’s usually obvious when a Fleetwood Mac track that belongs to McVie begins playing.  Her upbeat grooves are deceptively lighthearted, painting a contrast with the plainspoken but often emotionally raw content of her lyrics.  Said contrast seemed to speak to listeners; if you look at any breakdown of Fleetwood Mac’s greatest hits, nearly half are written and sung by McVie. Her songs showcase a sunny exuberance that, taken in context of a full Fleetwood Mac record, build a perfect contrast to the band’s darker tracks.  She’s also underrated as a vocalist; her deep, bluesy voice works wonders in a pop-rock context, bringing a gravitas to her own straightforward but heartfelt songs and giving them cunning little dimensions that aren’t always immediately apparent.

In early 2014, Fleetwood Mac announced that McVie would be rejoining the band after a long hiatus.  There are plans to tour; some are even hoping for a new record.  In the spirit of McVie’s return, let’s revisit fifteen of her most accomplished, most enduring contributions to Fleetwood Mac, and remind ourselves of what an integral strand she is in the band’s superstar DNA.

Great grouping of songs... Some omissions that could have made the lists... But it's all subjective.
Nickslive at Friday, February 07, 2014
Share