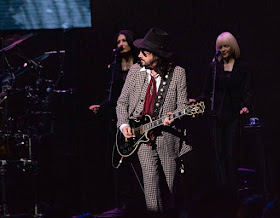 Although much has been made about Lindsey Buckingham's dismissal from Fleetwood Mac earlier this year, the band has been a revolving door since their formation in 1968. Hitting the nation's capital for their fourth consecutive tour, the Ottawa fans seemed nonplussed about the departure of one of the band's chief songwriters, packing the 19,000 capacity Canadian Tire Centre for "An Evening with Fleetwood Mac."

Heading up the 11-piece live band, Mick Fleetwood and John McVie were joined onstage by Stevie Nicks and Christine McVie, along with newcomers Neil Finn from Crowded House and former Tom Petty & the Heartbreakers guitarist Mike Campbell, whose lazy guitar style seemed out of step with his new band members.

Curiously opening the show with "The Chain," Finn sounded youthful and charming while replicating Buckingham's vocals, while the Christine McVie-penned "Little Lies" energized the crowd, who went on to sing along with Nicks passionately during "Dreams." Moving into Rumours album track "Second Hand News," the band flew through "Say You Love Me" and "Everywhere," which found McVie struggling to propel her reedy voice across the massive arena. The Nicks-sung "Black Magic Woman" (a Fleetwood Mac original made famous by Santana) featured a spectacular Christine McVie keyboard solo that unfortunately found much of the crowd leaving their seats to explore the arena's concourse.

Just as "Rhiannon" sent the audience back into a frenzy, the band ventured into a set of songs specifically designed for hardcore fans, playing pre-Buckingham/Nicks material that included 1970's "Tell Me All the Things You Do" and 1969's "Oh Well" with Campbell on vocals. "World Turning" stretched out to include an unremarkable and borderline-exasperating 14-minute drum solo from Mick Fleetwood that acted as a makeshift intermission for the other members.

After a solid rendition of "Gypsy," much of the band abandoned the stage again, leaving Finn alone with his acoustic guitar to belt out his Crowded House hit "Don't Dream It's Over." Then, following "Isn't It Midnight" and "Monday Morning," the band finished strong with fan favourites "You Make Loving Fun" and "Gold Dust Woman" before closing the set off with Buckingham's "Go Your Own Way."

Returning to the stage for an encore, Nicks took over the vocals for their cover of Tom Petty's "Free Fallin'" that found the stage's video screen maudlinly flashing photos of Petty with Stevie and/or Campbell. After another Buckingham song, "Don't Stop," the band closed off the show with Christine McVie's soft rock ballad "All Over Again" from 1995's little-remembered Time. That song, which is about moving on from a breakup and looking forward to the future, may or may not have been an analogy for the band's recent split. 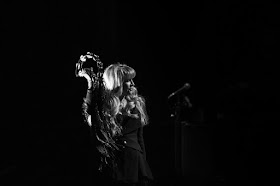 Although Nicks' magnetic stage presence gave their set some much-needed energy, Fleetwood Mac's latest incarnation seemed obsessed with their former band member, finding them utterly unable to stop themselves from reminding the crowd about the gaping hole Buckingham's departure left on the evening's performance. 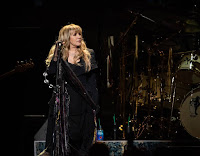 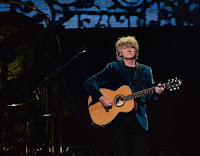 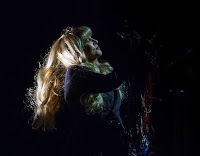 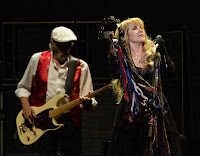 LANDSLIDE
RHIANNON
DON'T DREAM IT'S OVER