Review: still going their own way
Even without Lindsey Buckingham, the band's unmistakable sound, as promised, lingers on 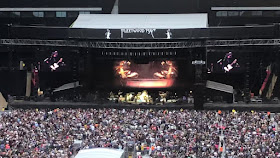 Like a mighty ship of state, Fleetwood Mac finally sailed into London over the weekend. One crew member, Lindsey Buckingham, had been cast adrift but two new shipmates – Crowded House’s Neil Finn and Tom Petty guitarist Mike Campbell – had signed up.

It had been a lengthy voyage. “This is the 61st show of a long trip that started last year,” said Stevie Nicks, “and we’re glad you’re all here. Let’s get this party started.”

The fear was that with Buckingham’s departure – he left under less than happy circumstances last year – Finn and Campbell would change the shape of a band that has already sold 100 million records worldwide. Mick Fleetwood wasn’t worried. “We jammed with Mike and Neil and the chemistry really worked… We know we have something new, yet it’s got the unmistakable Mac sound,” he said on the band’s website.

It was hard to argue with that, as they promptly emerged on stage and launched into a supercharged “The Chain” that immediately had everyone out of their seats.

The sound, despite the huge open spaces in Wembley Stadium, was big, thick and impressive. It even got intimate when Christine McVie, regal as ever all in black, gently sashayed into “Little Lies”. Crowd pleaser, “Dreams” was next, with a vocal chorus that came more from the audience than it did the stage.

It was a reception that seemed to energise an already hyperactive Nicks as she darted around the stage, her peerless vocals on the still enormously effective “Rhiannon” and admitting “I’m the black magic woman” on a reboot of a hit from 1968, and what now feels like the band’s distant past.

New boy Finn proved his worth with a melodic and touching version of Crowded House’s “Don’t Dream It’s Over” (with vocal support from Nicks) which fitted seamlessly into the Fleetwood Mac oeuvre. Campbell got his chance later in the evening with “Free Fallin’”, an emotional and moving tribute to the late Tom Petty.

It wasn’t all plain sailing. Mick Fleetwood appropriated “World Turning” for a drum solo, complete with screams which segued into a conga-driven battle with percussionist Taku Hirano as the rest of the band ambled off stage. It was interesting, but a tad too long for comfort. And while Campbell made a brave bid to tackle another earlier Fleetwood Mac classic, “Oh Well” it lacked the grandeur of Peter Green’s original version.

The band were on safer ground with “Go Your Own Way” which saw Finn step neatly and almost imperceptibly into Buckingham’s shoes. “Don’t Stop” closed the night. The music may have had to, but the good-time feeling lingered.


Fleetwood Mac have often described themselves as a dysfunctional family but, if so, domestic harmony seems to have settled on this brilliant, awkward band in what might well be their final incarnation. The first of two shows in the gargantuan Wembley Stadium was filled with blissfully melodic harmonies and an unusual mood of stress-free bonhomie on stage. Unusual for them anyway.

Fleetwood Mac gigs have tended to be tense affairs over recent decades, with tangible ego clashes and brittle competitiveness amongst band members, of which there have been 18 in their 52-year history. The rhythm section of highly animated drummer Mick Fleetwood and barely mobile bassist John McVie have been the only...

Full Review at the Telegraph

Review: Fleetwood Mac at Wembley Stadium
With no Lindsey Buckingham, what should have been a celebration of a huge band’s enduring power felt like an empty spectacle

By Will Hodgkinson
The Times
★★☆☆☆


And so the soap opera continues. The story of Fleetwood Mac’s 1977 album Rumours is enshrined in soft-rock history: new recruits Stevie Nicks and Lindsey Buckingham inject California pizzazz into moribund British blues rockers, their relationship crumbles and the result is the divorce classic of the 1970s, with Buckingham lacerating his former lover on Second Hand News and Go Your Own Way and Nicks offering the gentler Dreams.

Forty million album sales certainly helped the band members to see past their emotional entanglements and keep the show on the road, but it all got too much last year when, according to their manager, Irving Azoff, Buckingham failed to suppress a smirk during a speech by Nicks at an awards ceremony. That was the last straw.…

Full Review at The Times