“It’s huge, and it’s magical,” he said of the latest incarnation of the Fleetwood Mac. 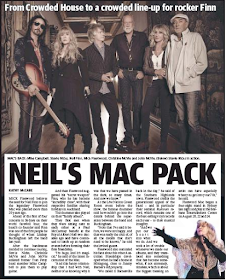 
MICK Fleetwood believes the seed for Neil Finn to join the legendary Fleetwood Mac was planted more than 20 years ago.

Ahead of the first of four concerts in Sydney on their world farewell tour, the band’s co-founder said Finn was one of the first people he thought of when Lindsey Buckingham left the band last year.

And then Fleetwood suggested his “secret weapon” Finn, who he has become “incredibly close”, with their respective families sharing holidays in Auckland.

The drummer also played on their “family album”.

They first met when they were sitting next to each other at a Paul McCartney benefit at the Royal Albert Hall two decades ago and have continued to catch up at random events before forming their firm friendship.

“It’s huge, and it’s magical,” he said of the latest incarnation of the Mac.

“And this funny relationship that I had with Neil, neither of us knowing why it was that we have passed in the dark, so many times. And now we know.”

At the Live Nation Green Room event before the show, the famous drummer said he wouldn’t go into the details behind the separation between the band and Buckingham.

“Note that I’ve said it before, we were not happy, and that was really the crux of, of all the details that don’t need to be known,” he told the invited guests.

Fleetwood also reminded his fans about his other Australian friendships developed when he had a home in Mittagong, close to Jimmy Barnes’s old property.

“We called it Barnesville back in the day,” he said of the Southern Highlands town. Fleetwood credits the generational appeal of the band – and in particular their seminal Rumours record, which remains one of the best-selling vinyl records each year – to their musical integrity.

“And we put our heart into what we do. And we took a lot of trouble whenever we made our albums, and they translated into something that has become somewhat, if not extremely, timeless, which is about the biggest blessing an artist can have especially when you get into your 70s,” he said.

Fleetwood Mac began a four-night stand in Sydney last night and play at the Brisbane Entertainment Centre on August 20, 22 and 24. 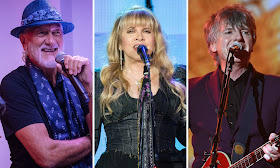 By Steph Harmon
The Guardian


Mick Fleetwood described Crowded House frontman Neil Finn as a “secret weapon” he held onto for two decades, before asking him to fly to Hawaii to audition for Fleetwood Mac.

In April 2018, it was announced that longstanding member Lindsey Buckingham would be leaving the band, to be replaced by Finn and Mike Campbell, the guitarist from Tom Petty and the Heartbreakers.

Ahead of the band’s Sydney stadium show on Thursday night, Fleetwood told a small industry audience the “magical” story of how he met Finn.

“It’s a long story – it’s over 20 years long. But it’s a lovely story. It’s a love story, really,” he said. “I’ve always, right from the beginning, loved his songwriting – especially one song that drove me over the wall – Don’t Dream It’s Over – years and years ago.”

Fleetwood had been a Crowded House fan “right from the beginning”, he said, but the pair didn’t meet until 1999 at Concert for Linda: a benefit tribute to Linda McCartney held at Royal Albert Hall. Finn was playing with the Pretenders; Fleetwood Mac was on hiatus.

“I didn’t know him from Adam, but later on that night just happened to be sitting with him,” Fleetwood said. “And I wasn’t doing anything, so I said, ‘Would you like to form a band?’ Drummers say that when there’s nothing happening,” he laughed.

“We had a great night, and broke a couple of glasses – so to speak – and then wandered off. And it never went anywhere.”

Finn and Fleetwood didn’t meet again until “I don’t know, 15 years later”, at the New Zealand Music awards in Auckland. “Going down the corridor I see him, and he said, ‘Do you remember me?’, and I said, ‘Of course I do! I’m your superfan!’. We went to dinner, and ever since then have remained and are incredibly close friends.”

Fleetwood told Finn that if he ever needed a drummer, “just let me know” – so when Finn and his son Liam began planning their collaborative 2018 album Lightsleeper, Finn cashed in the offer: “He said, ‘Are you serious?’ and I said, ‘Absolutely’.”

Fleetwood and his partner Chelsea rented a house in Auckland for six weeks. “We became a very, very close family [with the Finns] and helped out with their family album, which was totally cool. And that was that. And then this happened,” he said, referring to the departure of Buckingham.

The decision to hire Mike Campbell came easy – “both Mike and Tom [Petty] were very close to Stevie [Nicks]” – but finding a vocalist was harder. “We went through some suggestions – some of them were great, but they just weren’t right,” said Fleetwood, who admitted it nearly ended with the band saying “we can’t find anyone”.

Sign up for the Sleeve Notes email: music news, bold reviews and unexpected extras
Read more
“But then to be really truthful, I had my secret weapon … I said, ‘I would like to suggest that Neil Finn flies to Hawaii’, where we all were doing this.”

When he called Finn, he told him, “It’s not really an audition” – but it sort of was. Finn – who was at a soundcheck at the time – said “let me just take a breath … I’ll phone you tomorrow.” Fleetwood thought the jig was up.

“I thought, well, it was worth a try. But he phoned back and said, ‘Look. I’m not worried about all this thing about is it an audition. Who wouldn’t want to come – whether they succeed or not – and just play with Fleetwood Mac?’”

“It’s not a shaggy dog story,” Fleetwood said. “It is huge. And it’s magical. This funny relationship that I had with Neil, neither of us knowing why it was that we had passed in the dark so many times. And now we know.”

The current lineup is the 19th iteration of Fleetwood Mac, each of which Fleetwood described as “incredibly different musical episodes in this Shakespearean play we blundered into”.

Fleetwood didn’t reveal what was at the heart of the split with Buckingham, but he described it as “incredibly sad, and incredibly challenging. And incredibly – just – nowhere else to go.

“I’ve said it before: we were not happy. And that was really the crux of all the details that don’t need to be known,” he said.

“We decided as a band, are we continuing or not? … And I’m doing what I always do, which is, you know, keep the band together.

“Sometimes I look back wondering whether I’ve done the right thing. I think we did.”

Fleetwood Mac’s Stevie Nicks is also a longtime fan of Finn’s. Back in the 1980s she would make up her own harmonies to Don’t Dream It’s Over when it was played on MTV.

“A song like that comes around once in a lifetime,” she told the crowd from the stage on Thursday. “If you have one of those songs you have to sing it all the time, and you truly forget how good it is. So I have to remind him – and then I have to follow it up.”

The pair performed Don’t Dream together, and followed it up with Landslide.
Nickslive at Sunday, August 18, 2019
Share