"The hits just kept on coming." 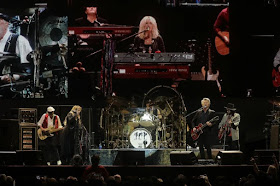 An extraordinary group of people comprise Fleetwood Mac these days - much technical brilliance, decades worth of experience, probably centuries really if you added it all together, and flat-out, no question, critically and commercially tested, outright talent.

Mick Fleetwood, Christine McVie, John McVie and Stevie Nicks may have lost Lindsey Buckingham in the last band shake-up but have added Mike Campbell (ex Tom Petty & The Heartbreakers) and Neil Finn to fill the gap and it’s evident from the opening song, The Chain, that they couldn’t have done better.

The hits just kept on coming, and not little ones either. These are the BIG ones. The songs that have been feeding commercial FM radio since its inception. Over two hours worth of songs that are so deeply ingrained in our collective consciousness that we don’t even remember how we know them.


Rhiannon, Say You Love Me, Go Your Own Way, Dreams, Gypsy, You Make Loving Fun, Landslide, Hold Me, Little Lies. And right now, in your head, you’re singing the hook to at least one of those as you read that list, regardless of whether you want to or not. They were all there and they were all welcomed with open arms as though they hadn’t been heard a thousand times each.

The inclusion of Black Magic Woman was a nice touch, not many knowing that it had been written by founding member Peter Green, and hearing Nicks give voice to the classic was a nice twist.

As was hearing Finn’s classics I Got You and Don’t Dream It’s Over with harmonies from Nicks. It would’ve been easy for Finn to be subsumed into such an iconic band, relegated to the role of the “Lindsey replacement”, and giving him space in the set to play two of his own songs could’ve potentially be seen as condescending. Instead it was clear how much mutual respect there is between these artists - and if it means that Finn gains some new fans around the world, that can’t hurt anyone either. There wasn’t his usual between-song patter that you would find at one of his own shows, but he did manage to slip in a potshot at the city’s lockout laws as he stood on stage about 15km outside their impact zone, with an indirect comment along the lines of, “You’re out of the inner city now, so that means you can have a good time. You can drink and dance as much as you like.”

By the end of the night, it was difficult to imagine they’d left anything in reserve for the obligatory encore. And then Campbell played the opening chords to Tom Petty’s Free Falling and Nicks stepped up to the microphone while photos of Petty appeared on the screen behind the band. Petty with Campbell. Petty with Nicks. Recent Petty. ‘70s Petty. Nicks and the crowd sang and it was a lovely and perfectly wonderful way to close the show until they started in on Don’t Stop, because of course they did. The perfect classic ending. 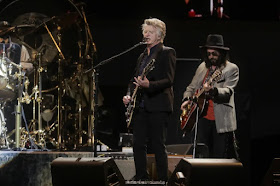 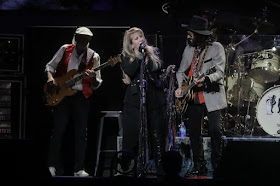